Not so boring: tunnel boring machines get a speed boost

“Faster than a snail” is the goal of Elon Musk’s “Not-a-Boring Competition” aiming to improve tunnel boring machine speeds. LAPP Australia is providing a suit of 200 products used in a design by Munich university students.


Tunnel boring machines (TBMs) are important for infrastructure development, and can ease the burden on above-ground traffic and nature, by moving important pipes, cables and civil infrastructure underground.

Infrastructure is one of the Australian government’s top priorities, with more than $15 billion to be invested over the next decade, according to the 2021-22 federal budget.


“Tunnel boring machines may well play a significant role in Australia’s infrastructure plan, but one downside is the speed at which they can operate,” said Mr Simon Pullinger, General Manager, LAPP Australia.

To come up with a solution to the slow pace of TBMs, students from the Technical University of Munich are competing in Elon Musk’s “Not-a-Boring Competition”. The aim is to lay the foundations for a technology that will revolutionise tunnel construction. Their tunnel boring machine has to be the fastest of the twelve finalists – and faster than a snail. LAPP has equipped the project with components to ensure reliable and efficient data and power transmission.

“There is an entire LAPP family on board – approximately 200 products, including cables for data transmission, sensors, actuators, power and control. Other LAPP products include connectors, Ethernet, servomotors, bushing, drag chains, and marking for quick identification. The whole system works in harmony to create optimum results for the project,” said Mr Pullinger.

“The students are working with advanced LAPP technologies and systems – examples of which are already in service in Australia – to advance even further LAPP’s expertise in this area,” he said.

The TUM Boring – Innovation in Tunneling Team at the Technical University of Munich is made up of sixty students from engineering, IT, aerospace technology, physics, business management, marketing and numerous other fields. It has set itself the aim of redesigning urban mobility by participating in the tunnel boring competition, with support from LAPP.

“It’s not the first time LAPP has been at the forefront of tunnel boring technology. LAPP provided ultra-reliable cabling to the tunnel boring machine responsible for the 57km-long Gotthard Base Tunnels through the Swiss alps. These tunnels lie up to 2.3 kilometres beneath the peaks of the mountains through which they pass, making them the world’s deepest and longest tunnel system,” said Mr Pullinger.

Jona Roßmann, who is responsible for External Relations Management at TUM Boring, explains that the problem is that current tunnel boring machines are far too slow – more than ten times slower than a snail, according to TUM Boring. “Current tunnel boring machines drill a maximum of five metres in an hour. The process is usually hydraulic, with the machine clamping to the wall using gripper elements. Only then can the drive presses push the drilling head several metres forward. Since the earth material must then be removed and the gripper elements repositioned, a drilling operation is not continuous,” said Mr Roßmann.

The team from TUM Boring has now developed a machine that moves forward continuously. The students’ solution is much more efficient, making it faster than current boring machines. It also meets the other stringent requirements set by Elon Musk for the competition. The teams’ solutions will be put to the test in the final: at a depth of 1.5 metres, they have to create a 30-metre-long tunnel with a diameter of 50 centimetres – in around three hours. And, with a remotely controlled car taking a test ride on the route at the end, a track must also be laid in the tunnel. The three winning categories in which the teams are assessed are: the fastest tunnel construction, the fastest tunnel construction including a test-driven route and the most accurate guiding system.

The tunnel boring machine from TUM Boring boasts efficient and parallel processes that are controlled by intelligent components. Four steel pipes 8.5 metres long, weighing 1.2 tons, are enclosed with asynchronously operating steel clamps, and are held in a revolving mechanism. A hydraulic drive, known as the “pipe jacking system”, first presses one of the steel pipes with the drilling head as it tips forwards.

After each drilling segment is fully pushed into the ground, the revolver holding the pipes rotates by 90 degrees, allowing another steel pipe to be pushed forward immediately, so that the drilling head is continuously driven. Each of the hydraulic presses has a propulsion force of up to 500 KN in continuous mode, and this can be doubled to 100 tons in discontinuous mode if necessary. The steel pipes have conveyor belts for transporting earth material and form the outer wall of the miniature tunnel.

Every movement is monitored by a control unit so that the drilling level can be checked and queried. A laser measuring system permanently compares the target and actual state, and a control unit on the drill head can automatically react to deviations. The test track for the test to complete the drilling is already firmly welded in the steel pipes. In order to transport the machine to the USA, where the final of the “Not-a-Boring Competition” is taking place, it was installed right from the outset in a 12 metre long, two-and-a-half metre wide and high container. 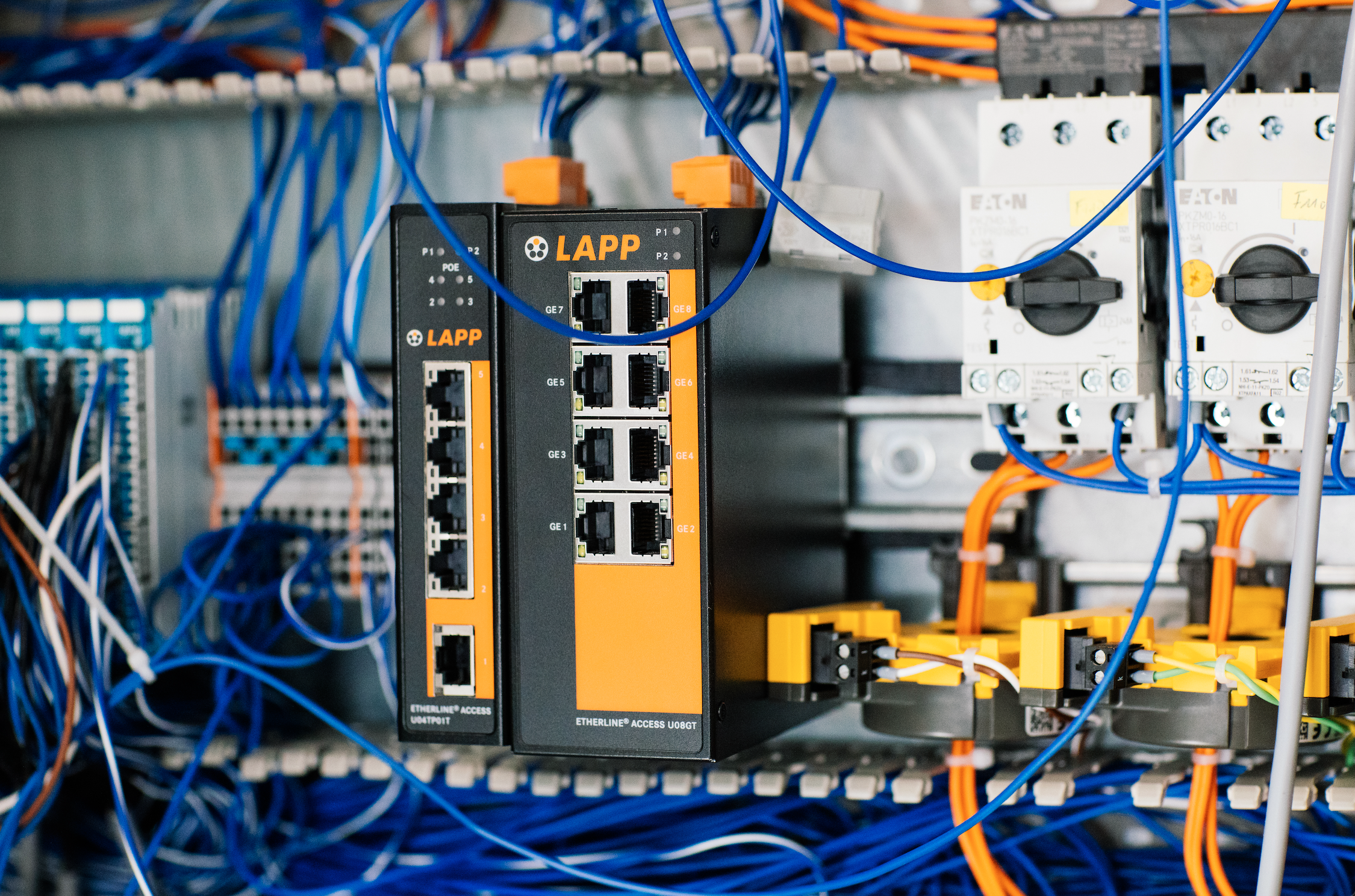 An entire family of LAPP products are on board the innovative TBM design.

The entire LAPP product family on board

The TUM boring team initially requested only a few components, which were followed by plugs, switches, protective conduits and drag chains during the planning process with LAPP.

“To provide optimum support for the project, it was important for us to incorporate the system and solution concept that we apply at LAPP. This means using optimally coordinated components,” said Mr Heimler.

Here, the team had three major challenges to overcome: an extremely small space, the high robustness required and enormous speed. This is because during the drilling process, the downstream segments on the data and power side must be re-connected as quickly as possible to complete the required 30-metre drilling distance in the specified time.

Other EPIC connectors from the LAPP portfolio ensure flexible use in the Ethernet application and supply the servomotors. In addition, ETHERLINE switches, cables and patch cables also ensure reliable data transmission in the machine.

UNITRONIC is being used for sensor/actuator cabling, as well as ÖLFLEX power and control cables and servo cables for supplying power to drives, hydraulic units and valves. SKINTOP multiple cable bushing systems help to insert cables with different outer diameters with strain relief and sealing into the housing. Last but not least, various FLEXIMARK marking solutions for connectors, cables and other components ensure space-saving and durable marking so that the right components can be quickly identified even in harsh environmental conditions.

Another major focus was on drag chains. “The students’ initial approach was very complex, which is why we proposed tried-and-tested applications and found a pragmatic solution together,” explains Mr Heimler.

For example, SILVYN CHAIN is now being used. Several drag chains contain the additional cable lengths required to quickly and reliably connect the individual segments of the tunnel boring machine. To do this, they are placed in a type of drawer behind the connector board. Another drag chain on the revolver is used to supply power to the drilling head and conveyor belts.

Mr Pullinger concludes that the solutions from LAPP ensure that the tunnel boring machine and its countless intercommunicating components, such as pressure and distance sensors, work continuously – even in tight spaces and under extreme conditions. “Thanks to the reliable connection solutions from LAPP, the tunnel boring machine is well equipped to revolutionise tunnel construction – and the future of our mobility.”

‘Not a boring competition’ by The Boring Company challenges teams to come up with tunneling solutions and answer the question, “Can you beat the snail?”. Out of nearly 400 applicants, twelve teams have advanced through the technical design reviews and have been invited to compete at The Boring Company’s Dig-a-Factory to bore a 30-meter tunnel with a cross-sectional area of 0.2 square meters.

Finalists for the 2021 Not-a-Boring Competition include: