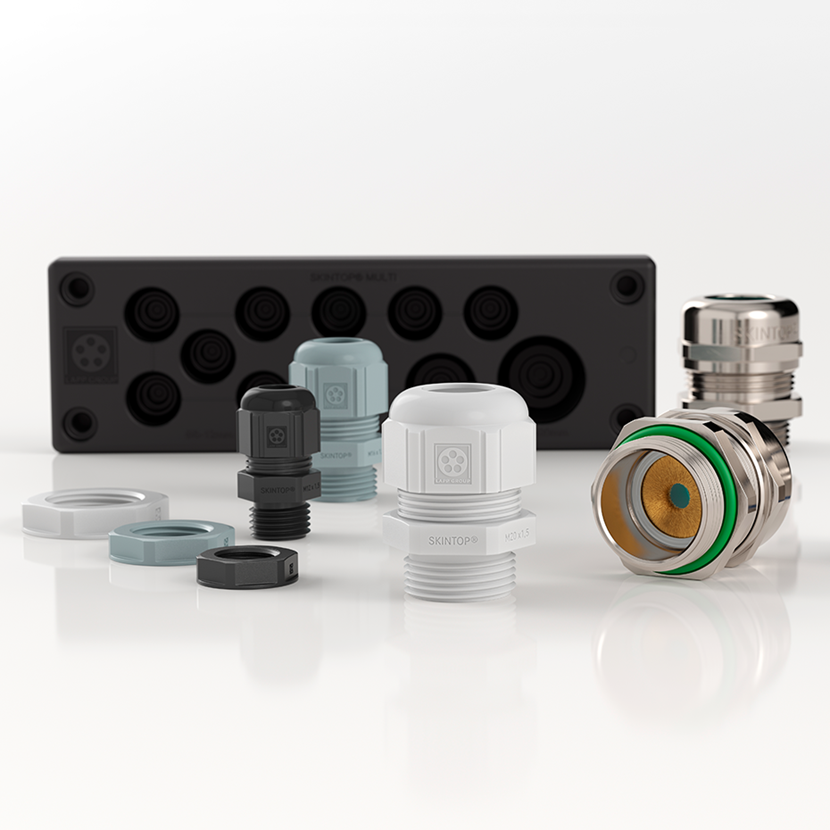 The globally proven SKINTOP® cable gland system will be highlighted by LAPP Australia at AUSPACK March 26-29 as a range that cuts cable system assembly time while offering optimised protection indoors, outdoors and in hot or cold conditions.

The patented system is widely used in automation, electronic, energy and measuring and control technologies across a wide variety of industrial uses requiring high performance sealing, gripping and clamping with outstanding protection from dirt, oil, water and vibration.

This high performance protection – complemented by compliance with leading international quality Standards –- is engineered to ensure reliability and productivity even in aggressive or exposed applications, ranging from demanding cleaning regimes though to offshore uses and solar energy.

The broad SKINTOP® range from one the world’s leading providers of branded cable and connector systems, LAPP, ensures a tailored solution to every wiring challenge with its own special features, says LAPP Australia General Manager Simon Pullinger.

Different versions of the product are tailored to the needs of industries, such as food and beverage and primary processing and manufacturing, including the new SKINTOP® HYGIENIC. Others respond to the needs of large-diameter cables, multi cabling, UV resistance, temperatures as low as -70C (SKINTOP® Cold) and safety in hazardous areas (SKINTOP K-M ATEX with worldwide IECEx approval).

“SKINTOP® cable glands ensure a secure connection in a matter of seconds, typically cutting 20 per cent of more out of assembly times. These universal systems are simple, easy to install, securely fixed, centred and hermetically sealed,” said Mr Pullinger. “In Australia we stock a wide range of models to suit all types of applications, including ATEX, EMC and ECOLAB approved environments.”

The SKINTOP® range will feature at AUSPACK 2019 in Melbourne from March 26-29 (Stand G130).This first appearance of the fully-fledged LAPP subsidiary in Australia – opened in February 2018 – will provide key markets with a unique overview and personal introduction to Lapp’s globally respected product families, used in Australia for more than 30 years and produced at 18 manufacturing locations on four continents. LAPP’s innovative global brands include: