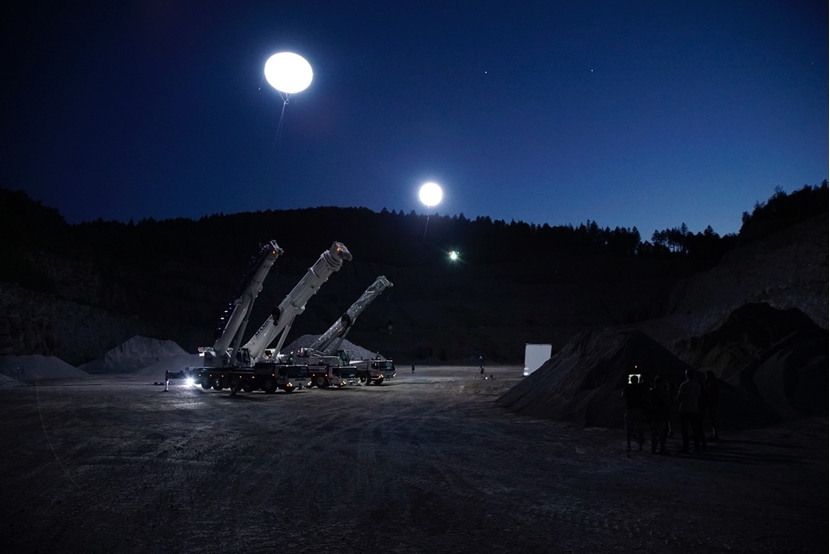 Is that the moon, or a balloon?

Lightweight self-illuminating balloons are often used by filmmakers to provide even overhead lighting for night scenes. 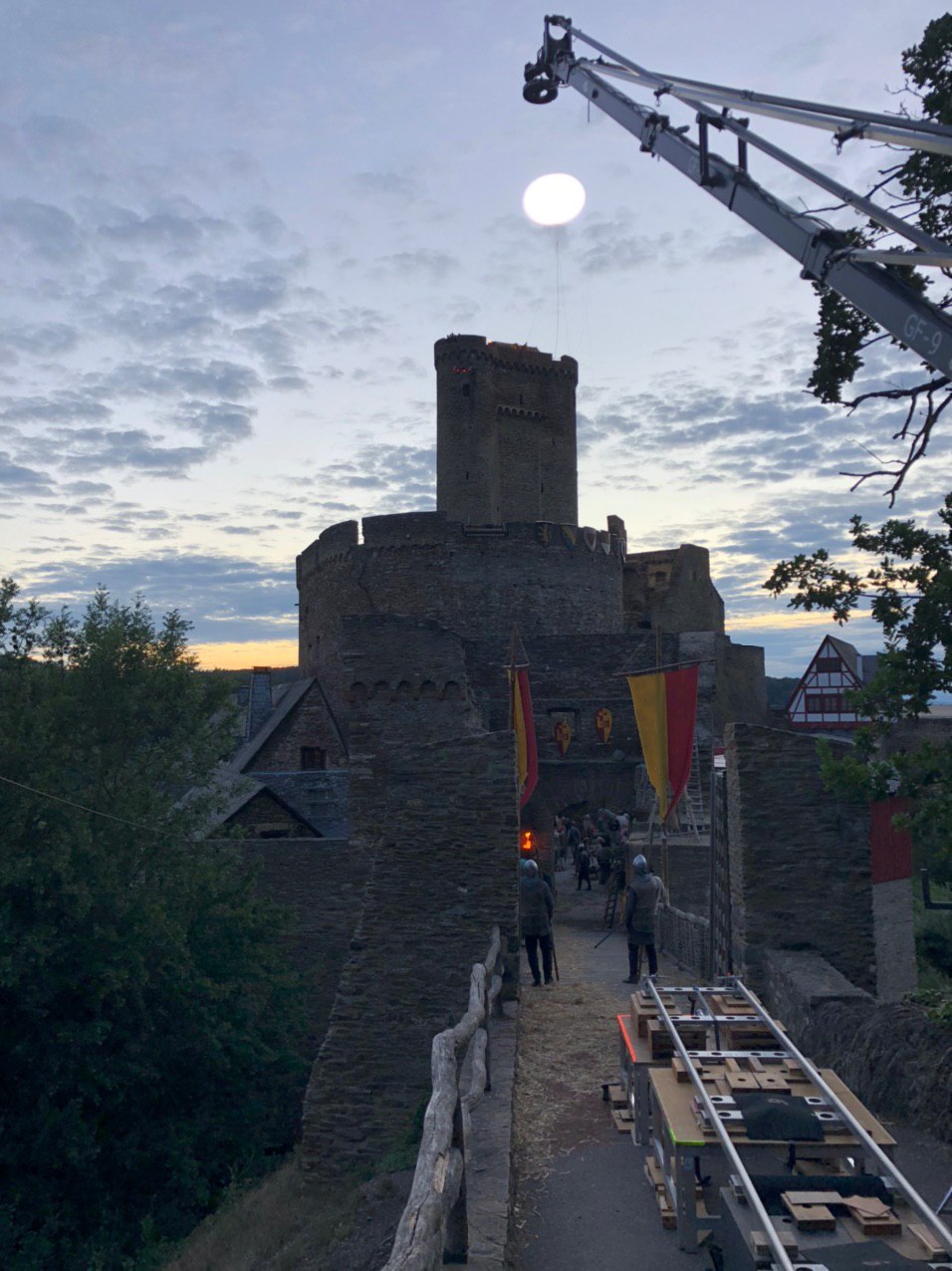 The founder of blberlin, Fabian Friedrich was a trained carpenter by profession, but became fascinated with helium filled lighting balloons when he first saw them used by a French company in the 1990s.

“At that time, it was a totally new way of lighting large surfaces at night. Finally, light had been set free and we could have a large self-illuminating surface floating above the set,” Mr Friedrich recalls. It was a method that an increasing number of camera operators liked, as they had previously had to use unwieldy cranes and aerial platforms for lighting.

Mr Friedrich founded his company in 2001, bringing in components from France to recreate the solution for the German film industry. But because spare parts from France were expensive and the light intensity requirements for film productions were constantly increasing, in 2006 he started working with his electrician to develop his own lighting balloons for film sets.

One thing was clear: All components had to be as lightweight as possible - including the connectors. “We needed the smallest possible lightweight connector that allows high current loads and can fly as part of the balloon. My electrician was familiar with LAPP. The advice from the local application engineer at LAPP was uncomplicated and we quickly found what we were looking for,” says Mr Friedrich. The EPIC® Power LS1 industrial connector was chosen, and is exceptionally robust against impacts and environmental influences. Since then, Mr Friedrich has remained loyal to LAPP's connection solutions. “The quality of the products and the service are great,” he adds.

The lighting balloons can rise to between 10 and 80 metres depending on requirements. The balloons consist of a special helium-tight and translucent special coating. Inside is the electrical unit with the illuminant. A plastic plate at the “south pole” at the bottom seals everything hermetically. This is also where the EPIC® Power LS1 connector is integrated. ÖLFLEX® ROBUST 210 power and control cables, which transmit 220 volts or even high-voltage power at 380 volts, ensure a reliable downwards connection.
Mr Friedrich and his team develop and produce their helium balloons based on the relevant requirements on the film set such as lighting levels, light output and light colour. And precise calculations are always essential. Each cubic metre of helium generates 1.1145 kg of lift. This means that the weight of every component for the balloon – from the special translucent coating for the casing to the luminaire to the circuit board and the connector – has to be taken into account.
The plastic casings alone are designed for six to 81 cubic metres of helium as required. “For us, every gram counts,” says Mr Friedrich. Finally, the wind load also has to be considered. The balloons must stay up even in windy conditions. They are approved up to a wind strength of four. For this reason, the current wind data from nearby airports is regularly retrieved on the film set.
Now, blberlin has around 70 different balloon versions and around the same number of different control units with cables and connectors that can be installed in the balloons virtually “plug and play”. The flexible combination of balloons and control units means that a tailored solution is usually ready to hand. Depending on requirements, they can be used in artificial light, daylight and mixed light areas in and deliver a light output of up to 50,000 watts.E 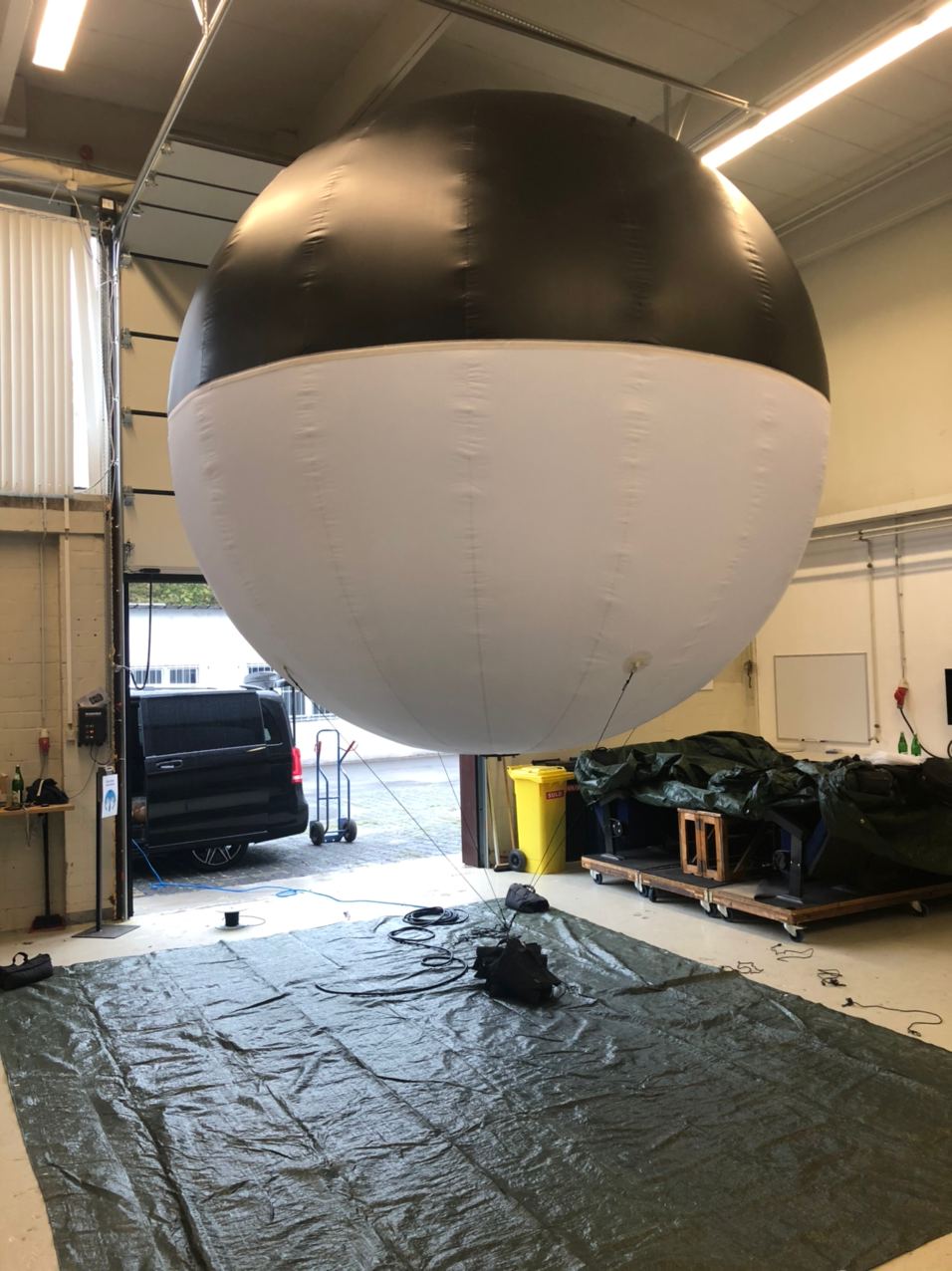 Mr Friedrich had his most interesting contract on Lake Turkana in Kenya a few years ago. A film about child soldiers was made there over two and a half months. The Berlin-based company designed a helium balloon with a diameter of 5.5 metres and an output of 42,000 watts especially for this film. It had to float at a height of 80 metres above the landscape at the edge of the lake. “We developed our own prototype for the job and shipped it to Nairobi. We only had time to test it once, but thankfully, everything worked,” says Mr Friedrich. The entrepreneur rarely comes into contact with the film stars. When it does happen it’s by accident. On the Valkyrie film set in Berlin, he suddenly found himself standing next to Tom Cruise. Mr Friedrich says with a smile: “I didn’t even notice at the time, but my wife told me about it later on.”

Working almost exclusively with freelance staff, blberlin does most of its business with the European film industry. Film balloons for night transmissions were followed by effective, fast and power saving illumination of blue and green screens. More and more balloons are also being used for outdoor transmission in sporting events, especially in open countryside, skiing, downhill and biathlon. At a G7 summit in 2015, balloons printed with a portrait of Barack Obama were even floating in the Bavarian sky as an art project.

Mr Friedrich is optimistic about the future. “At the start of the pandemic, business came to an almost complete stop. But everything began to return to normal again very quickly. Our team is always a long way away from the set and films are in demand more than ever before in the shutdown.” Last June, his company was renamed blberlin UG and a partner was added. The company has big plans. “In five years, we want to be the market leader for film balloons in Germany,” says MR Friedrich with confidence, and emphasises that he only works with high-quality material that lasts many years. The team is currently developing innovative new LED balloons, where the connectors need to be even more compact.

“We will be developing a tailored solution for them,” said Joachim Strobel, Product Manager for EPIC® connectors at LAPP.