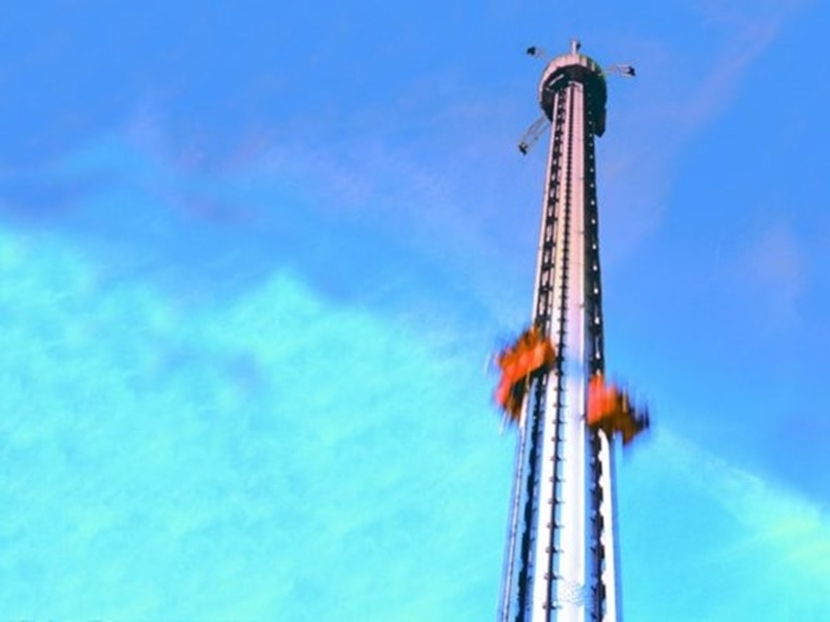 Fritt Fall is not for the faint hearted. Up to 4,000 visitors a day can enjoy the biggest attraction of the Gröna Lund theme park on the island of Djurgarden in Sweden’s capital Stockholm. The passengers are lifted to a height of 80 metres at a rate of three metres per second before falling into the bottomless pit – “fritt fall” means “free fall”.

In under three seconds they reach 100 km/h – a breathtakingly terrible pleasure, where you should not have eaten much before. If that sounds too boring for you, you could sit in the Fritt Fall Tilt gondola, which is tilted forward 20 degrees before falling. The fall is particularly scary because the strong magnetic brakes only engage shortly before impact on the ground, saving the passengers from imminent doom at 3.5 times the force of gravity.

Of course, the illusion of danger is just that: an illusion. The Fritt Fall Power Tower, as it was initially called, has been accident-free for 20 years. In 1997, it was converted from a pure observation tower to the park’s biggest attraction – at the same place where Stockholmers enjoyed themselves as early as the 18th century.

Even though the park is only open from April to September, 20 years in the harsh Swedish climate is a long time, and so Gröna Lund Tivoli AB, the operator of the amusement park, decided to overhaul the Fritt Fall. The control system was replaced and so were all the cables. They not only have to withstand high mechanical loads, but also rain, sunlight and rodents.

All manufacturers comply with the safety standards in accordance with the applicable machine directive. Fritt Fall has been upgraded to this latest safety standard. Among other things, two-channel sensors are used, which offer redundancy if a sensor should fail.

The manager of Gröna Lund’s electrical department, Jesper Frantzén, quickly found a reliable supplier for the connection systems. He had already had contact with Fredrik Gustafsson of LAPP Miltronic AB in Nyköping for several smaller projects. For the maintenance of other attractions such as the Insane roller coaster with its side-mounted, fully rotating seats, the Ikaros drop tower with its head-up seats or the rotating Bläckfisken octopus, Frantzén had ordered industrial connectors EPIC® Signal M23 as well as cables such as H01N2 and ÖLFLEX® CRANE. “We were very satisfied,” says Mr Frantzén.

LAPP Miltronic, which has belonged to LAPP since 2008, was consequently also awarded the contract to renew the control system of the Fritt Fall. The company was able to supply all the products needed in accordance with a strict timetable in several tranches, because the installation of the cables was to disturb the other renovation work as little as possible.

First the control cables were installed, then the data cables. To save time during installation, Frantzén decided to order pre-assembled cables. LAPP Miltronic had already shortened these to the appropriate length and equipped them with the necessary connectors.

Cables for power and data

The cables transmit signals from inductive and other sensors to the central control system. This system controls solenoid valves, drives and other components. Gröna Lund Tivoli AB installed the following LAPP cables in Fritt Fall:

• The workhorse is the ÖLFLEX® CLASSIC 400 P. It serves as the control and power cable and connects, for example, the connection boxes of the sensors, the limit switches and the busbars. It is also used to power the cylinders. The ÖLFLEX® 400 P is particularly durable in harsh environments due to its highly durable jacket material made of polyurethane (PUR). It is also oil- and UV-resistant, which is equally important because some sections of the cables are installed outdoors and exposed to sunlight. The cable is fine-stranded to Class 5 and is therefore very vibration-resistant.

The cables are all so robust that they can withstand rain and UV light for many years. In addition, the cables are oil-resistant and some also have rodent protection. The cables connect the operator’s control panels in the base of the tower with the engine room at the top. They are located in the elevator shaft inside the tower and

were pulled up by ladders. During the overhaul, all control cabinets and consoles were also replaced.

“Thanks to the excellent cooperation with LAPP, Fritt Fall will continue to meet the highest safety standards in the future,” says Jesper Frantzén. “And our guests can look forward to a horrible pleasure.”